THE MIRAGE - You Can't Be Serious · LP 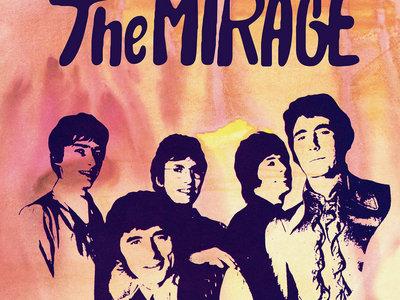 With one foot in the harmony beat–pop of the Hollies and other in the early psychedelic pop experimentation of Revolver era Beatles and Syd Barrett’s Pink Floyd, The Mirage left behind a string of 45s and unreleased studio recordings, a selection of which is presented here for the first time on LP.

Featuring UK psych classics like "The Wedding Of Ramona Blair", "Hold On", "Ebanazeer Beaver", "Mrs Busby" and many more!

The Mirage were a quintet from Hertfordshire, England, formed in 1965.

Fuelled by two gifted songwriters (Ray Glynn & David Hynes), they were soon recruited by Dick James (music publisher of the Beatles and the Hollies) as session musicians. Allan Clarke and Graham Nash from the Hollies were so impressed with them, that they took them under their wings, helping them to get a deal with CBS.

Between 1965 and 1968, the Mirage released and self–produced seven singles for different labels (CBS, Phillips, Page One...), including titles like "The Wedding of Ramona Blair" (pure psych–pop perfection, included on Rubble in the 80s), "Hold On" (a mod–psych classic), "Tomorrow Never Knows" (a surprising cover released at the same time as Revolver, thanks to their Dick James connection), "You Can’t Be Serious" and more.

But they also recorded lot of stuff that never saw the light of day at the time. These unissued songs run the gamut from magical Hollies inspired harmony pop ("Gone To Your Head", "What Do I Care", "I Want Love"...) to pure psychedelic pop, highly influenced by early Pink Floyd and Revolver era Beatles: "Lazy Man", "Ebaneezer Beaver", "Mrs Busby"...some of these tracks were included in the 90s on famous bootlegs like "Artifacts From The Psychedelic Dungeon" but now it’s the first time they’re all collected on a legit vinyl compilation, making "You Can’t Be Serious: 1966–1968", the missing album The Mirage could have released at the time and a must for any UK psych aficionado.

It comes with detailed notes by Stefan Granados (author of The Beatles and Apple Records: Those Were The Days 2.0 book, telling the interesting Mirage story, including their connections to Dick James, the Hollies, Spencer Davis Group, Caleb (of "Baby, Your Phrasing Is Bad" fame), Plastic Penny, Portebello Explosion...

"The Mirage created some of the most interesting, enjoyable and ultimately enduring records of the era. It’s remarkable to think that the majority of their finest work from that time had remained unheard until recent years."
– Stefan Granados