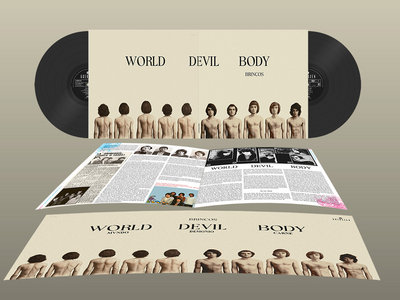 *50th Anniversary deluxe edition of this Spanish psychedelic/progressive masterpiece from 1970!

*Double set including the Spanish version of the album plus, for the first time on vinyl, the alternate English version that Fernando Arbex (Brincos main man) considered to be the definitive one and that he couldn’t release at the time, including different tracklist / mixes than the released at the time English one, resulting in a fabulous psych album with a strong late ’60s British feel.

Influenced by psychedelia, prog–rock and underground sounds, Los Brincos (now simply named ’Brincos’), led by drummer / main songwriter Fernando Arbex, decided that their new album would be a conceptual work – something never seen in Spain until then – similar to what other international bands like Beatles, Who, Moody Blues or Pretty Things were doing. The concept behind the album was supposedly to be based on the three enemies of the soul: the world, the flesh and the devil, hence the final title: "World Devil Body".

This ambitious work was recorded by the new Brincos line–up – with famous Spanish musician Augusto Algueró as arranger – at the same place where King Crimson recorded their legendary debut, Wessex Studios in London, using the same sound engineer, Robin Thompson.

The recording sessions were intensive and highly productive, with the band giving plenty of room to improvisation. Some songs were sung in Spanish, some in English, being the central piece an outstanding 12 minute long conceptual psych suite, sung in English and titled "Mundo Demonio y Carne" ("World Devil & Body"), comprised of four parts and written by Fernando Arbex and Oscar Lasprilla. There was nothing similar in Spain at that time and this track stands today as one of the earliest, if not the first, progressive pieces ever recorded by a Spanish band.

Regarding the other tracks, we find many surprises: a long eastern sounding instrumental ("Kama–Sutra"); the eerie "Esa Mujer", with a hair–rising orchestral arrangement by Algueró, featuring members of the London Symphony Orchestra; British influenced psych–pop "Jenny La Genio", "Promises and Dreams" or "Butterfly" (which featured vocals sung through a megaphone!); hard–psych with plenty of guitar and Hammond ("Emancipation", "Misery & Pain")...

The album was originally intended to be housed in a gatefold cover with artwork by hyperrealist painter Claudio Bravo, showing the five members of the band naked from their waists up. It was instantly rejected by the label. Also, the heads of the label showed little interest in this project, as they didn’t understand it at all, putting many objections to the proposed tracklist / release ideas. In the end, the release received zero promotion. Finally, the album, housed in a new cover by another painter depicting a bizarre viscous brain, was released in 1970 in two different versions: one in Spanish (Mundo Demonio Carne) and another in English (World Devil Body). They featured different tracklists / songs but both versions included the English sung "World Devil Body" suite. Fernando Arbex had the US market in mind for the English version but in the end that version was released only in Spain, Germany and, oddly enough, Japan. The album was received with mixing reviews...it was too ’progressive’ for most of the Brincos fans and the few progressive music fans in Spain didn’t even bother to listen to it, as they still thought of Brincos as a pop band. Soon after, the band, tired and exhausted, disbanded after giving an amazing concert at a famous progressive music festival in Barcelona, sharing stage with new Spanish underground bands like Máquina! and Smash.

During the years, both the Spanish/English versions of the album have been reissued many times. Then, in 1997, Fernando Arbex released (only on CD) what he understood was the definitive English version, featuring the nude Claudio Bravo cover for the first time and a new, different tracklist that, according to him, was the one he originally intended to release in 1970 but couldn’t do it due to frictions with the record company. The result is an English sung album with a strong late ’60s British psychedelic flavour, including one of the best tracks Brincos ever recorded, "If I Were You" (which inexplicably was not included in the original release at the time) and a different mix of the "World Devil Body" suite.