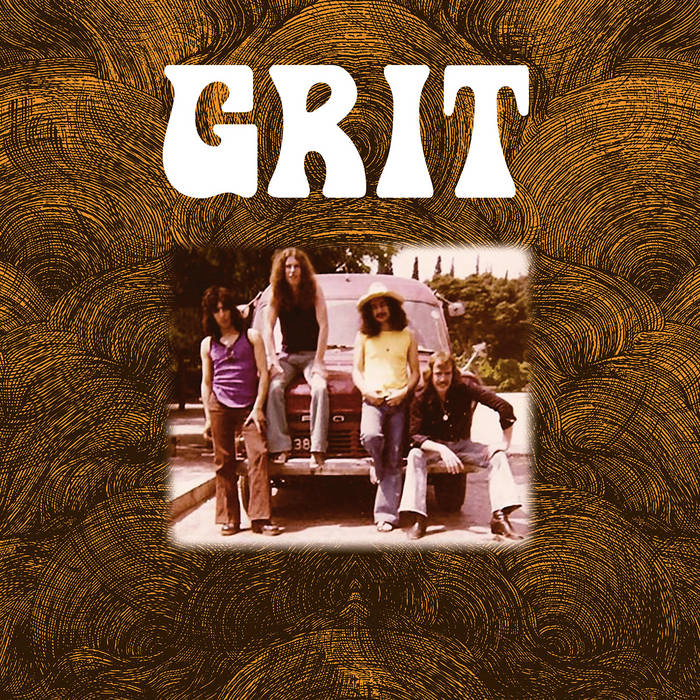 First ever reissue of this ultra-rare acetate (three copies pressed) from 1972!

Featured in Hans Pokora’s book with the maximum scale rarity.

Psychedelic hard-rock with furious drumming and stunning lead guitar by this unknown until now London based band. This, the first ever reissue, includes the four tracks from the original acetate (taken from the master tape) plus two bonus tracks taken from lo-fi, crude rehearsals: “1000 Miles” (A Grit original) and a killer demo version of “Mineshaft”.

Frank, nicknamed “Spider”, has an interesting story: at the beginning of his musical career he auditioned for Joe Meek at his Holloway Road studio. Later, he also played with a band called Grand Union - who supported Pink Floyd in 1968 - and with members of the John Dummer Band. An electronic wizard, Frank also worked building amps and electronic equipment at Nolan Amps, MIDAS, etc. He built the Twin Stacks and PA’s that later would form part of Grit's equipment.

Tom Kelly came from a band called Connexion and Paul Christodoulou had played in Merlyn along with Frank. After some attempts, the definitive line-up of Grit was born when Frank and Paul convinced drummer Tom Kelly to join them, after assisting to a Nazareth concert. They also recruited powerful singer Jeff Ball after an ad in Melody Maker.

On Christmas Eve, 1972, Grit recorded a demo at SWM Studios and two copies of a one-sided 12” acetate were pressed for promo purposes. It featured four self penned songs: the killer “Mineshaft” (pure underground fuzz hard-rock) and two lengthy numbers: “Child and The Drifter” (with some furious drumming, stunning leads and hard-prog moves) and the hard-psychedelic “What Do You See In My Eyes” / “I Wish I Was”.

Armed with the acetates, the band visited some music agents in London but nobody was interested. But while looking for a manager, they found a company who secured them a Greek tour. This was a true adventure and they managed to appear on television and play with big names from the Greek psych-prog scene like Socrates and Peloma Mpoklou in big festivals. Sadly, due to a family problem, Frank had to leave the band and return to England. That was the end for Grit.

40 years later, one of the two copies of the original Grit acetate was found at a flea market in Germany, which led to its inclusion in the 7001 Record Collector Dreams book by famous collector Hans Pokora. The band still remained a mystery until 2019, when, by pure chance, Alex Carretero from Guerssen found Frank Martinez and he opened his vault, which included the original master tape of the Grit acetate and several tapes with rehearsals from Grit and Merlyn.

So, we’re proud to present the first ever vinyl release of one the rarest artifacts from the UK 60s-70s underground scene, including an insert with rare photos / memorabilia and detailed liner notes.